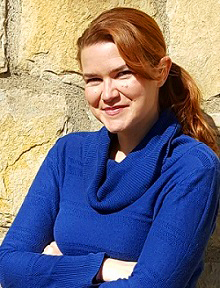 Award-winning paranormal romance author Vivi Andrews was born and raised in Alaska. A nomad by nature, she still calls Alaska home, but can frequently be found indulging her travel addiction. Thankfully, her laptop travels with her and she has written her way through fifty states and over fifty countries.

In 2009, Vivi won the Romance Writers of America(R) Golden Heart Award and released her first two paranormal romance novellas, launching the Karmic Consultants and Serengeti Shifter series respectively. In the years since she has written and released over twenty paranormal romance novels and novellas. Her books have been selected as Top Picks by Romantic Times Bookreviews and nominated for their Reviewer’s Choice Awards, as well as other awards.

She also writes contemporary romance under the pen name Lizzie Shane and has been named a finalist in the prestigious RITA(R) Award three times for her contemporary works.

When she isn’t writing, Vivi enjoys reading, hiking, skiing, and watching every movie ever released, though she is most often found traveling or planning her next trip. Whether at home or on the road, she is always hard at work on her next happily-ever-after.

Meet Vivi at the Romance Writers of America National Conference in New York City, July 24-27, 2019 where she will be signing books at the Literacy for Life Signing.