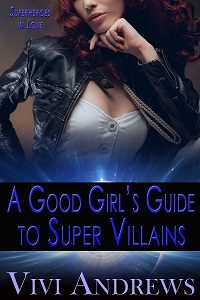 Relationships are complicated enough without adding super powers to the mix. Second generation hero Darla Powers, AKA Dynagirl, has been nicknamed the Jessica Rabbit of Supers, but she still can’t seem to find a man who doesn’t feel emasculated by her super-strength. If she can’t have a partner in fighting crime, she at least wants someone to come home to when she’s done saving the city. But the leather-clad supervillain breaking into city hall isn’t who she had in mind – no matter how supernaturally hot he may be.

Lucien Wroth doesn’t see himself as a bad guy, but when you’re the son of one of the world’s most infamous villains you don’t get a lot of second chances – and he’ll gladly accept the villainous reputation if it helps him rescue his little sister. Lucien is determined to get his sister away from the supervillain using her for her powers and clear her name, even if he has to go through one very sexy superheroine to do it.

When Darla and Lucien square off, sparks – and debris – fly. But as a bigger threat forces them into an uneasy partnership, Darla begins to suspect the perfect man for a good girl just might be a very bad boy.

SUPERHEROES IN LOVE, BOOK ONE

~ The Complete Superheroes in Love Series ~