He’s on fire for her… literally. 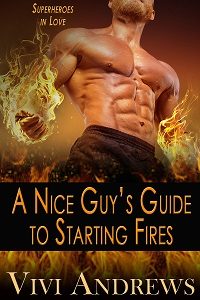 Superhero research scientist Dr. Eric Eisenmann always wanted to be super himself, until he was abducted, experimented on, and woke up pyrokinetic – the least stable of all the super abilities. Suddenly he’s lighting everything he touches on fire whenever his emotions get the better of him. Desperate to turn his powers off, Eisenmann’s only hope for a cure lies with a woman who wants nothing to do with him – and fires up the very emotions he needs to keep in check.

As the only non-super daughter in a superhero dynasty, Tandy Nightwing has been poked and prodded for years in an attempt to find the cause behind her powerlessness. Now that she’s finally happy with her normalcy, the last thing she wants is to subject herself to another scientist’s tests – but she can no more resist Eisenmann’s plea for help than she can resist the good doctor himself.

Deep in his underground lab, Eisenmann must maintain rigid control of his feelings, but his attraction to Tandy constantly tests his restraint. Powerless or not, she might be the one woman brave enough to stand close to his fire – provided they both survive when their experiments unleash a passion that burns red hot.

~ The Complete Superheroes in Love Series ~