Trust is a dangerous drug. 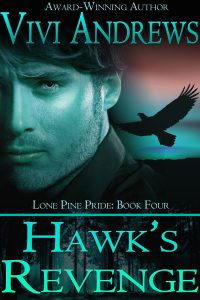 Hawk-shifter Adrian Sokolov made the mistake of trusting the beautiful Dr. Rachel Russell once – and wound up drugged, captured, and experimented on. He isn’t about to make the same mistake again, but it’s a risk he may need to take to escape the Organization labs.

Ever since Rachel discovered her bosses were kidnapping and experimenting on shape-shifters, she’s been walking a fine line – playing the part of the obedient scientist while secretly smuggling the shifters out of the Labs. Now the higher-ups suspect they have a mole and Rachel knows she has to flee, but not before she frees the hawk with the intense yellow eyes who she was forced to betray.

When their escape goes wrong, Adrian abandons her – only to realize he may have been wrong about Rachel all along. To save the woman who broke his trust, he must face the Organization that destroyed him… before she pays for his freedom with her life.