Love doesn’t stand a ghost of a chance. 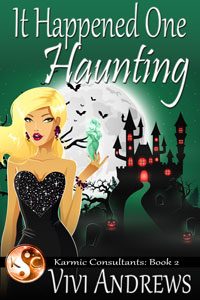 Billionaire hotel magnate Wyatt Haines doesn’t believe in ghosts or anything that stretches his definition of normal. Unfortunately, his new Victorian inn appears to be extremely haunted and his only hope for evicting the ghosts and opening on time is the snarky ghost exterminator who’s been shunning normalcy ever since she started seeing ghosts when she was six.

Jo Banks just wants to get the job done and get far away from the uptight, materialistic and irritatingly sexy Wyatt, but when her extermination goes awry, she accidentally sends two prankster ghosts into Wyatt’s body to haunt him. He’s going to have to start believing in ghosts – and Jo – fast. Especially when every time he falls asleep, the mischievous ghosts take over, turning his perfectly ordered life into chaos.

Jo will need to think outside the box to unhaunt Wyatt and figure out why so many ghosts are swarming his inn. Preferably before her latest client’s spirit is permanently separated from his mouth-watering body.

And before her heart is permanently attached to the most sexy, frustrating, normal man she’s ever met.

**Previously released as THE GHOST EXTERMINATOR**