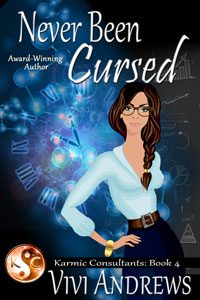 Neuroscientist Dr. Mia Corregianni doesn’t believe in magic, and to her true love is just an unproven hypothesis. But when she loses the heirloom watch her family believes is enchanted with a potent love spell, she fights superstition with superstition by hiring a psychic finder to track it down.

Chase Hunter is just the psychic for the job, a human finder who homes in on whatever the seeker wants most… when he isn’t surfing and avoiding real human attachments as he has since his family was killed in an accident six years ago.

Unfortunately, Mia’s case isn’t a simple insta-Find. Her complicated feelings toward the source of all her family’s superstition block Chase’s abilities and instead wallop him with her innermost desires every time he tries to use his gift.

To conceal his real purpose from her family, Mia and Chase agree to a pretend relationship, but as her family and his friends throw them together, that fake romance begins to feel all too real for the man who can’t let himself live again and the scientist who doesn’t want to believe in magic… or love.