Demons can be hell on weddings. 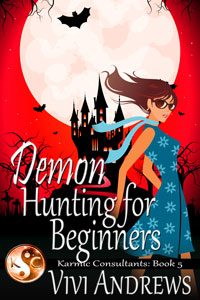 Karmic Consultants exorcist Luis Rodriguez will take any job that gives him a break from exorcising demons for the desperate housewives who’ve been betting on who can seduce him first – even if it means helping Karmic’s newest hire plan a wedding that seems to be plagued by demonic accidents.

Brittany Hylton-VanDeere is the kind of girl whose glass is half-full, rose-colored and sparkling with a silver lining. She’s delighted to be working for Karmic Consultants – even though their no-office-dating policy means she has to keep her hands off the sexy, tattooed exorcist. But it’s hard to keep her hands to herself when a mischief demon keeps throwing her into Rodriguez’s arms.

At first Rodriguez isn’t sure what to make of bright-eyed, somewhat illogical Brittany, but with every new disaster, he falls farther and farther under her spell. To get the girl, he’ll have to stop the demon, who is determined to stop the wedding even if it means stopping Brittany. Permanently.

**Previously released as THE SEXORCIST**