What happens in Atlantic City… changes everything. 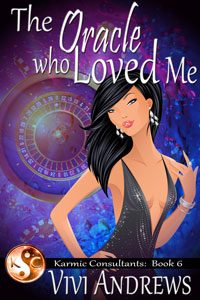 Ciara Liung is the FBI’s secret weapon, a psychic with an amazing ability to locate stolen jewels. Her new handler, Special Agent Nathan Smith, will believe that when he sees it – which may be problematic, since Ciara’s ‘gift’ only works in the nude. But her gift is also a curse – psychic feedback makes human contact nearly unbearable for Ciara. Incapable of a normal life, she’s cut herself off from the world and lives in isolation.

Nate is struggling with his own limits. Recently injured in an undercover op gone wrong, he’s chafing under the restrictions of his new desk job as Ciara’s FBI liaison. He doesn’t believe in things that come too easy and a psychic finder stretches the limits of his credulity too far.

When they’re tasked with finding a famous ruby necklace, Ciara will have to step outside her comfort zone – and her clothes – to allay Nate’s suspicions. But as their search takes them to Atlantic City, a single moment changes everything… and the love they find may be even more valuable than the famed necklace.

**Previously released as THE NAKED DETECTIVE**