Double crossing a devil is a dangerous business. 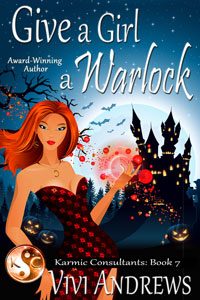 When Karma, founder of the Karmic Consultants paranormal problem solving firm, confronts the unscrupulous warlock responsible for a series of pranks endangering her people, the last thing she expects is that the terms of their cease-fire will include saving the bastard’s life.

Nearly two decades ago, Prometheus sold his beating heart to a devil in exchange for astounding power, but the clock on his contract is running out. If he can’t convince Karma to tap into her own repressed powers to help him steal back his heart, he won’t live to see his next birthday.

Clinging to her hard won control is the only way Karma knows to keep her abilities from overwhelming her, but if anyone can tempt her to let her hair down and embrace the chaos of her magic, it’s the unnervingly compelling Prometheus.

Little does she know the unethical warlock has a hidden agenda and they’re both about to learn how deadly it is to double cross a devil.