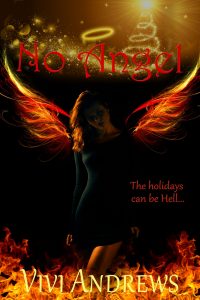 Sasha Christian’s mother may have been dubbed the “angel” of Hollywood, but she’s never had anything to do with the real heavenly host, or their demonic counterparts. So she’s more than a little surprised to learn her boyfriend, Jay, has been sucked through a fiery vortex to Hell on Christmas Eve. When an angel reveals that Sasha’s been chosen as the Champion of Virtue in the battle for Jay’s immortal soul, she feels like the least qualified person to fight on the side of the angels. But if she doesn’t save Jay, he’ll be stuck in Hell forever.

Jay—aka Jevroth—isn’t surprised to find himself back in Hell. His visa to visit the mortal plane expired three months ago, but to steal more time with Sasha he’s been ignoring his mother’s demands that he come home to spend time with his new stepfather: Lucifer.

Sasha has until dawn on the twenty-fifth of December to fight the Legions of Hell and rescue Jay, or be trapped there for eternity herself. But when she finds out he hasn’t exactly been truthful about his family history, she must decide if the lying son-of-a-demon is even worth saving…

~ Reviews of the No Angel ~

“NO ANGEL is a witty and irreverent take on a Christmas story.” -4.5 Blue Ribbons, Romance Junkies.  Full Review

“From the opening line of No Angel by Vivi Andrews, it becomes apparent that readers are in for a treat.” -B+, All About Romance.  Full Review

“Ms Andrews drew me effortlessly into her fascinating world with a delightful, very original concept, and she kept me on the edge of my seat with a good balance of action, suspense and shocking revelations. NO ANGEL is one hell of a story that kept me in heavenly delight long after I finished reading.” -Top Pick, 5 Stars, The Romance Reviews.  Full Review