When survival is a battle, love is the ultimate luxury. 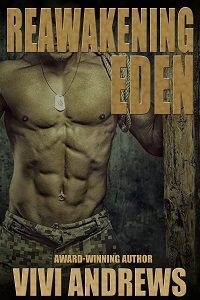 After an epidemic wiped out over ninety-nine percent of the world’s population, Eden Fairfax went from librarian to surrogate mom to a pair of orphans. Suddenly she’s focused on day-to-day survival and on the run from a fanatic group determined to center their new religion around Eden and the only children known to have survived the plague.

Former Army Ranger Connor Reed just wants to be left alone to live out the end of the world in peace, but when one of the cult’s trackers catches up to Eden and the kids on his land, he can’t stand by and do nothing.

Eden doesn’t know whether the armed hermit who looks like something out of an action movie is their salvation or an even more dangerous threat, until an early winter storm hits and she’s forced to trust him, taking shelter in his cabin. In the seclusion of the storm with Connor, Eden finally feels safe and remembers what it felt like to live rather than just survive each day.

But she knows that feeling can’t last. Not with a cult leader closing in who will stop at nothing to bring Eden and the children back.