It might be love – if they don’t kill each other first. 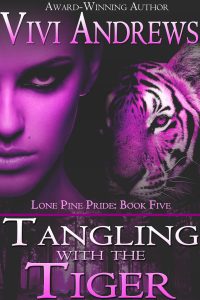 Siberian tiger-shifter Dominec Giroux doesn’t play well with others. Horribly scarred by the scientists who killed his family and tried to turn him into their pet assassin, his sanity has been hanging by a thread ever since his escape. He’s had one reason for living – to take his revenge on the bastards. But when he snaps and goes on a little killing spree during one of the shifters’ strikes against the Organization, it doesn’t go over so well with his pride mates.

As the only female lieutenant in Lone Pine Pride history, Grace Calaveras has a lot to prove, and a lot on her plate. The last thing she needs to deal with is Dominec’s brand of crazy, but until she can get him under control and keep him from screwing up future tactical missions, she’s his babysitter.

It would take a miracle for these two to find common ground, but when they’re sent on a mission that could impact the future of every shifter in the world, the lioness and the feral tiger form an uneasy alliance… and unleash an attraction that could be their salvation, if it doesn’t destroy them both.